We thought that this would be a good time to update you on the progress of the Scottish arm of the campaign. Time flies and although we have been busy, we wanted to let you know what is happening now and to give you some dates for your diary. 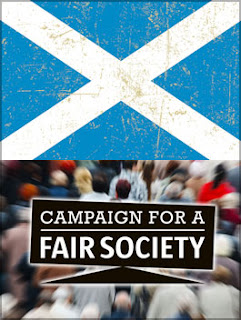 At our meeting on 15 April in Glasgow, 22 people volunteered to come onto the steering group. Not everyone is able to make it to every one of the monthly meetings but we have still managed to attract a core group of around 9 people who attend.

We are keen to have the steering group as representative of the wide cross section of society who are affected by the cuts as possible and we are delighted that, for example, Jim Elder-Woodward of Independent Living in Scotland will be attending our meetings from now on. We are also hoping to elect office bearers in the near future so if you did volunteer but haven’t made it along so far, it’s not too late to get involved. Even if you didn’t volunteer at the time but feel that you have something to contribute, please get in touch.

In addition to the Scottish committee, there is now a Welsh and English committee and the UK organisers hope to establish something similar in Northern Ireland in due course.

You will remember that one of the very positive outcomes of the April meeting was the development of a Scottish manifesto. We have agreed that our priority over the coming months will be to officially launch this and promote its values. We hope to do this later in the year.

Other exciting developments have been:

Campaign for a Fair Society will mark its first anniversary with events of its own on 8 February 2012. We have a blank slate for what we should do in Scotland so would be delighted to hear any ideas. Bear in mind what the weather will be like in February though!! It would be good to show the many skills and talents that people have and to celebrate these in some way whilst also campaigning for a fair society.

In the age of new media, we know that we must use every possible method to get our message across so we have lots of different ways that you can stay informed.

These are as follows:
You can visit our Facebook page at Scottish Campaign for a Fair Society

There will be regular Scottish updates on the Scotland page of the website at www.campaignforafairsociety.com/scotland

You can email, Norma Curran, the interim Chair at [email protected]

We believe that the true impact of the cuts haven’t even started to bite yet and that we have to stand together and strong during the coming months. Individually, no-one is likely to listen but together then surely someone must before it is too late!

We have produced a micro site based on A Manifesto for a Fair Society where we outline the main Manifesto principles and publish related articles. Follow this link to visit the micro site.